A sneak peak into the new year? or Just when you thought I couldn't get weirder...

So I'm already pretty weird right?  (you don't have to lie, I'm secure in my weirdness)


But this morning SP and I definitely reached a new level of weirdness as we've started "juicing."  I know that the word juice should generally not be put into a verb format, especially when you aren't talking about juicing an orange etc... but you know, you do what you have to do.


I know that juicing is a pretty old concept but its new to me.  And definitely new to SP who grew up in a very meat and potatoes family (I mean I grew up in a pasta and sauce family so it's not like either of us grew up with Jack Lalanne as our grandfathers).


But recently several of my friends have been on some serious health kicks (people going vegetarian and vegan and even juicing etc).  And I like to be alive.  So I'm always interested in new ways to add some healthy to our food "regimen" and some potential years to our lives.


I also watched the documentary Fat, Sick and Nearly Dead (which I highly highly recommend everybody watches) which got my juicing wheels a turning.  Now all this being said don't get all preachy on me.  I'm not going to stop eating real food, because peeps, you know I like food...like A LOT.


I am jumping on the bandwagon of this healthy juicing nonsense.


So last night.  SP and I strapped on our big girl boots and went juicer shopping.  (I must divulge that she and I, combined and separately, had already done quite a bit of online reviewing).  And then (at Best Buy of all places) we found this Beaut!  And she was shiny and clean and ready to juice every kind of strange veggie and fruit combo.  (I had to explain to the cashier what it was and what it does...yeahhh...16 year olds who work at Best Buy apparently aren't really into juicing)


After a quicksie-poo trip to the local grocery store to stock (i.e. STUFF) our fridge full of veggies and fruits, SP and I went to bed ready to try our first juice in the morning. 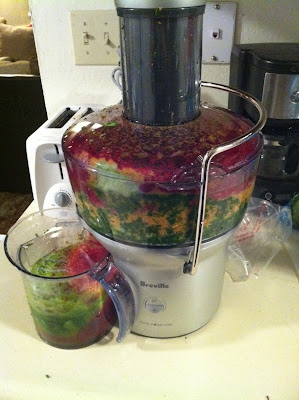 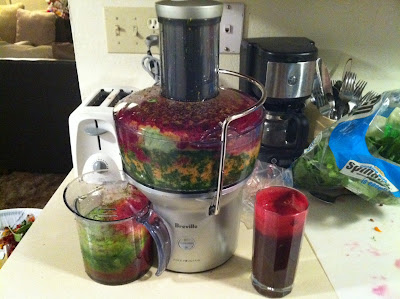 Tie dye you ask?!  Juice I say!
That freaky red color comes from beets (not my fav) Overall I would say the first juicing experience was a success.  Minus the fact that it looked like something got slaughtered in the kitchen (beet juice looks freakishly like blood) the juice was fresh, relatively tasty and the juicer was so easy to use and didn't make Kori cower the way that the blender does.
And to add a little TMI to your day - my pee was one SCARY color after this!
Cheers!
Posted by Bloggity Bloo at 11:20 AM