And now for your reading and viewing pleasure.  The Europe Chronicles...in installments.

What can I say about London?  Everything.  My soul made an instant connection with beautiful bustling London.  It was like my British parts (there are some, ask my granddad!) felt their homecoming.  The adorable accents, the beautiful coats.  The happy shiny Londoners.  They are so kind and so English and were incredibly (surprisingly?) helpful.

After traveling for about 20 hours and having been awake for probably about 72 hrs, SP and I arrived in Heathrow Airport.  (sidenote, international airports are hell).  There is nothing like going through customs for the first time.  There is nothing like realizing you are in another country.  SP kept saying, "we're in England B*tches!" or rather slurring it as her mouth was drooling from extreme exhaustion but you get the picture, it was adorable. 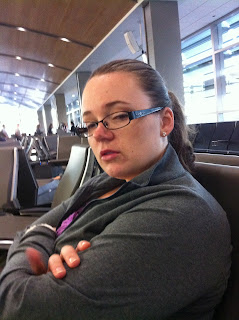 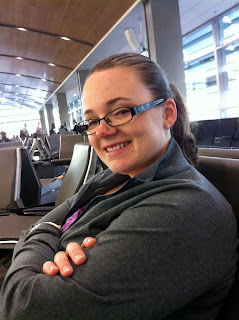 SP is none too pleased that our wedding just ended like 6 hours before this pic was taken...

We arrived to Heathrow at approximately 8am London time and approximately who-the-F-knows-what-time Sarah and SP time.  We were exhausted, smelly, exhausted, and exhausted.  But persevere we did.  First thing first we went to get a metro card where I promptly broke the machine - because that is the kind of power I have over technology - 40mins later Karim(I think?) had gotten me a replacement card and helped us to get a bus tour booked and had directed us to our hotel.  Glory hallelujah.  This is the part where I was insanely glad we were only traveling with carryons (oh yes you read that right, we did 2 weeks and 4 countries with only carryons - and you can too my friends, you can too!)

After a lot of public transportation we got to our hotel and promised ourselves we would not go to sleep.  Instead we sleep walked around the city and tried to figure out what to do.  Trying to figure out how to stand up was a challenge in and of it self.  Why we thought we could sight see at this point was beyond me.  We did (after one massive, exhaustion induced, fight) make it to the London Eye.  Where we saw amazing sights - and luckily took pictures because every time I sat down I fell asleep for at least 30 seconds until SP would yell at me, "get up, get up you're sleeping!"  We also saw some other cool things (you know like big ben and westminster abbey...no bigs) and then made it back to the hotel at about 4pm where I made the insanely massive mistake of laying down for what I thought would litterally be 30 seconds (my legs were hanging off the bed).  Cue 6'oclock when SP and I wake up, (my legs no longer work by the way, as all the blood in my body has now pooled in my cankles) wipe away the drool and realize we better get up.  Cue 8'oclock when SP and I wake up the second time (I'm going to have to go to the hospital now, my cankles have elephantiasis) and realize we better eat something.  Except its 8pm and we're in god knows where and nobody is out eating dinner.  Options are looking pretty grim - smashed luna bars from my backpack and tap water anybody?!  European meal # 1 - prepared food from the quicky mart downstairs.  Pasta salad and a baguette never tasted so good.  We then proceed to sleep for approximately 14 hours.  And it was glorious. 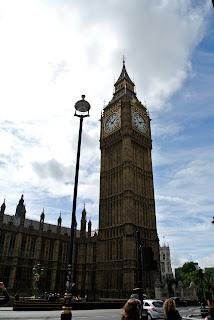 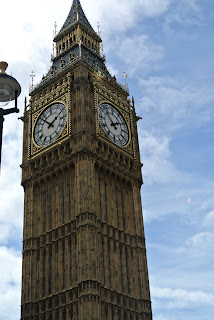 Apparently it was the Olympics or something...

The next day we played super tourists.  We rode the hop on hop off bus and saw essentially everything.  I won't name them off all laundry list like because that's le-boring.  I will tell you how amazing St. Paul's Cathedral is.  And how fantastic it was to climb all 5trillion stairs to the top of the dome.  It was worth every step and every heaving breath.  The views, the whisper gallery it was the perfect introduction to a beautiful city. (Hold on, a million pictures coming...now...) 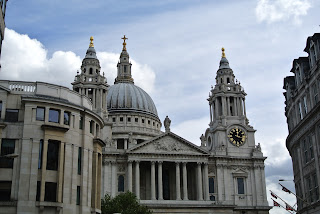 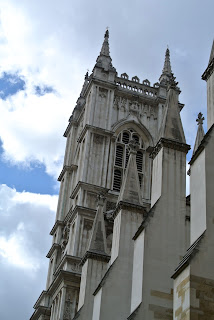 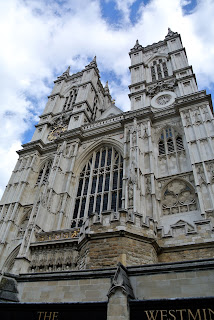 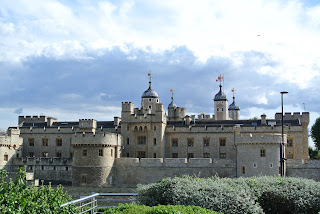 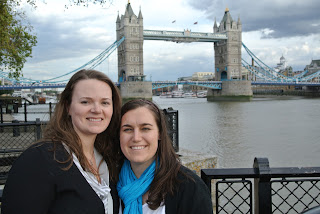 Us with the Tower Bridge 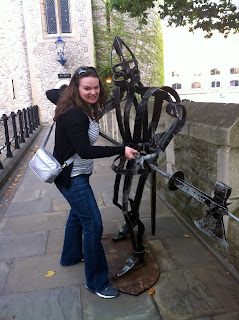 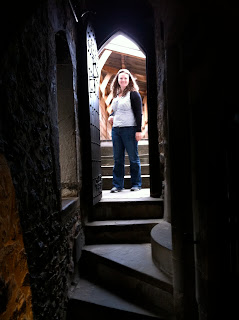 My cutie at the Tower of London 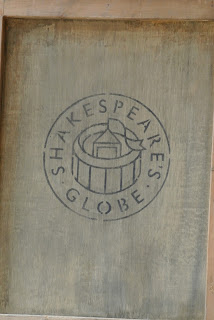 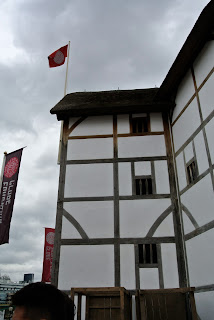 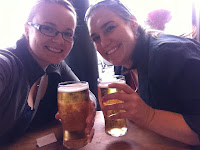 Dear Banoffee Pie and Pints of Strongbow you are from HEAVEN

London treated us well.  The perfect mix of all things old and British with the hustle and bustle of modern metropolitan London.  And while they say Paris is the Romance City, London is where I left my heart.  I can't wait to go back.  I know we will.  These pictures take my heart there now... 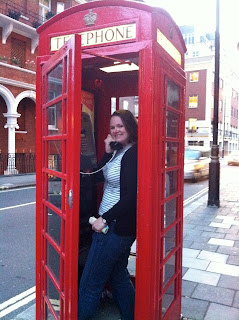 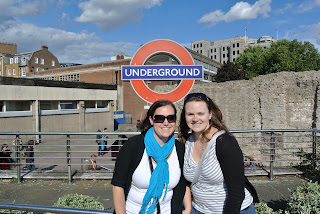 Part II: Paris, or how to walk until your feed bleed.  Literally.
Posted by Bloggity Bloo at 11:33 AM