This parenting thing is hard and it's sucking all of the blogging life right out of me and I've become one of those dreaded once a monthers - ugh.

That being said, we've hit such a sweet spot with baby girl these days. She's solid and hilarious and much more a baby and much less a blob that we cart around with us. She loves the exersaucer, she loves laughing at the dog, she loves pulling hair and most of all she loves to EAT!  She's been on rice cereal since about 4 months and is going strong. We haven't given her anything else because we are the laziest parents in the world and we just haven't gotten around to it. Except for that one time we fed her guacamole and she wasn't opposed - I know I'm sure it was a major no no because it had all these flavors and citrus and stuff - whatever judge me. You know what I fed her smushed up pear from pear pie too so there's that. 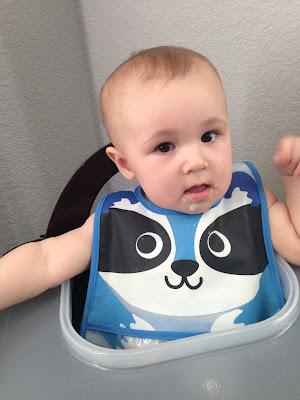 In other news she cut two teeth on the bottom. Luckily she appears not to be the super whiny type. We had one really off day (no sleeping, no eating, lots of fussy) and then it was over. Did I just jinx the hell out of myself or what?!

Most of the time she's so damn cute I can't even stand it. Except, tell me experienced parents, is this kid EVER going to grow some hair. For awhile we were calling her baby trump because she had this awesome flop over thing going on. Now we can't speak that name so mostly I just call her tooty pants - but that has more to do with the other end of her.

Its pretty run of the mill over here, most days we get up, love on her, get ready for work send her to day care, pick her up, get home, love on her, feed her for the 99 millionth time and then she goes to bed. And then SP and I collapse onto the couch and don't get up until we go to bed. Sometimes I sleep on the couch then wake up and go to bed. I don't think anybody explained how much of a time suck these tiny creatures are...I volunteered for this right? RIGHT?! ;)

But really people, how do you have any hobbies once you have kids please explain this to me. I've finally resurrected book club and reading for fun.  I FINALLY finished one fun book - I've probably been reading it for 10 months now... And at least I "see" my friends at book club every couple of weeks.  But other than that man...not much. And we've seriously become those parents who weigh whether an activity is really worth disrupting bed time for. Like go out to eat and push bed time back and risk baby implosion or maybe just get take out and stay home and put the baby down and collapse on the couch. Sadly (or happily?!) it is often the latter...

We did manage a trip to the "Pear fair" which was this teensy tiny festival all about pears. And it was the most awesome 1 block parade I've ever seen. We at ALL the pear things (pear and proscuitto pizza, pear salsa, pear sausage, pear pie, pear ice cream...), looked at the biggest pear (2.12lbs in case you are wondering) and generally soaked in the small town charm. And then we all went home and fell asleep. (seriously though we did) 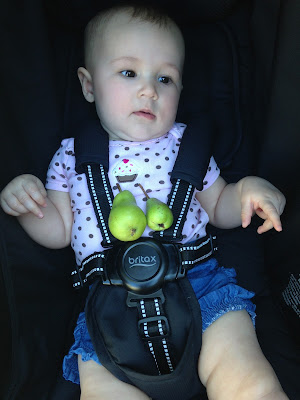 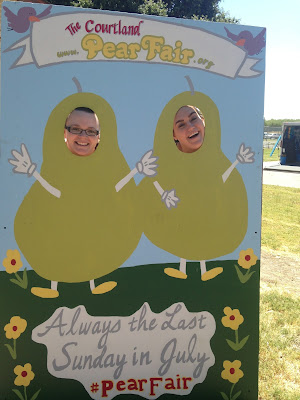 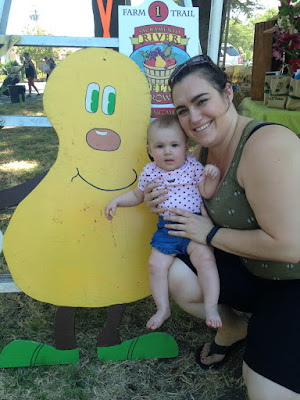 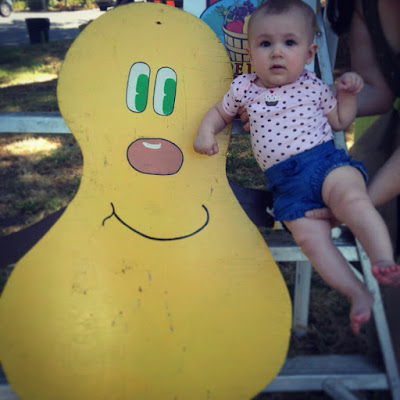 The grandparents are coming to visit at the end of August so that should be fun stuff and we've fit in a few friends here and there so I suppose we can be proud of that. We've also lost our minds and decided to try to do some updates on our house - because why wouldn't you want to rip your floors out when you have a 6 month old?!

We're all riding the crazy train over here my friends!

Over and Out
Conductor Sarah
Posted by Bloggity Bloo at 11:42 AM