Vegan Superbowl and cooking lessons from the Jetsons

Ok so crockpots are really cool.  You throw a bunch of ingredients in it in the morning (or the night before d-day) you put it on low, you leave for work, you come home and there is really rad food waiting for you?!  WHAT?!  Its like magic.  Or the Jetsons.  Or something equally as cool.  Why was I not introduced to the joys of le crockpot earlier?  Probably because my mom made actual real homecooked meals (that were generally good - except those corn fritters mom, I still hate those) and therefore didn't cop out to the crock pot.  But guess what?  I'm lazy, and I work a lot, and when I get home my woman (esmerelda, the crockpot) better have a nice meal ready for me - and oh does she ever.  Pork stew, chili, soup...the goodness abounds.
I guess there are a few downsides to esmerelda - for one thing she seems to only make hot foods.  Which is not nearly as enjoyable when its 102 degrees outside, and I suppose there is the small possibility of fire, or that she creates something super NOT tasty (like that one time I accidentally made a meteorite for dinner…), but so far she has become my newest most favoritest companion (sorry SP...)
Here is what my sisterwife is makin today…(Korean chicken!) 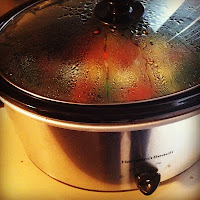 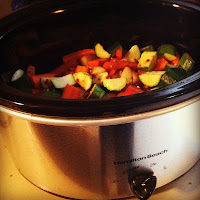 This weekend however was the weekend of produce.  By the bushel.  I don't even know how much a bushel even is... but I'm guessing its a LOT.  (Please note: 1 US bushel = 35.239072 liters thank you google calculator)
Bestie-westy came to town today.  And since she (and her kooky sister) have gone vegan on me it was like produce palooza up in this joint.  Besides the fact that SP and I already consume a disturbing amount of produce, with a vegan in the house our refrigerator was exploding at the seems with kooky fruits, veggies, vegan sauces and dressings.  And let me tell you something.  It was THE BOMB.
And since it was the superbowl (which apparently real Uh-merican’s must watch) we had vegan superbowl funs (aka my coffee table has exploded with produce).  It was fantastic and we dvr’d it and got our American-ness revoked because we fast forwarded most of the commercials and portions of the game (so sue me). 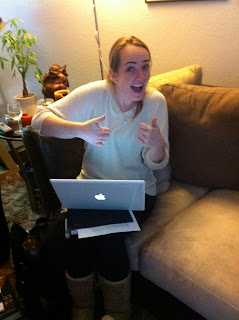 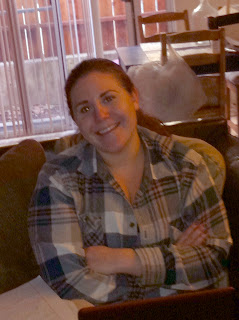 Dorks studying during the supah bowl.... 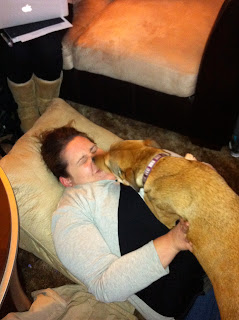 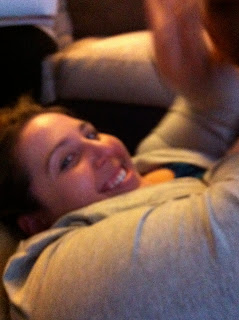 Kori loves bestie!
So in review.  Football is dumb.  Crockpots and produce are awesome.  However I ain’t going vegan any time soon  (I still love you cheese!)  and we all now know how much a bushel is.
Peace out homies!
Posted by Bloggity Bloo at 11:51 AM