Car Shopping aka the 9th Circle of Hell

Hola Amigos.
Guess what.  I'm an adult now.  I have had my American coming of age experience.  I bought my first new car.  And yes I bought it.  My richy daddy did not buy it for me.  It was simultaneously exhilarating and terrifying at the same time.  Like the kind of anxiety excitement that sort of makes you want to throw up in your mouth a little bit.  But its done now.  And the American Honda Association now owns my soul.
Here's how it all went down.
On Friday night poor SP had to work late.  Because she works like a dog taking care of other people's elderly family members (and she really loves them - so the next time you are yelling at the person in the old folks home, remember SP and how she's busting her butt out there in the world of elderly care).  We were so looking forward to some relaxing time and a movie etc because it had been a long week and we both had to work on Saturday (yeah...)  Unfortunately as o'dark thirty I get a call from SP saying that Hunter died.  (Hunter is my car, not a human being)  I then found out that Hunter had made it nearly home and was exactly 2 blocks from our home where he had completely died.  (After making "the worst noise in the world") Needless to say he had gone to the great car beyond and there was no bringing him back from the great white light.
Saturday morning I drove SP to work and then went to work myself and then picked up SP from work wherein we decided we were clearly going to have to get a rental car because this wasn't going to work.
Sunday we spent ALL day at an enormous automall in northern california that shall remain unnamed because I'm about to slander them BIG TIME.  It was all of your car buying pet peeves and nightmares to the extreme.  They were slimy and pushy and bombarded us with manager upon manager.  They tried to convince us that we wanted a red car (big fat NO) that we should wait 8 weeks for the car we did want and in the meantime pay eleventy billion dollars, wouldn't let us leave like it was prison or something and then they CALLED US WHILE WE WERE AT LUNCH.  Dudes.  It was heinous.  We left overwhelmed and exhausted when they had pushed us beyond our skeeze handling limits and I thought SP was either going to cry or punch a sales person in the face.
On Monday night we called yet another car dealership.  They gave us prices over the phone.  I know.  You're as shocked as I am right now.  Because they were willing to talk money on the phone I decided that we could actually go to said car dealership and see how it went.  Night and day.  There was nobody around because it was Monday frickin night.  They were super friendly.  They weren't pushy.  They laughed with us and didn't make it a weird thing that we were 2 women buying a car together (wait are you guys sisters?  Your partners?  Like partners in crime?  Oh you're together?!  slimy face and a high five then! - um no.)  It was just a pleasant experience.   And so we disregarded everybody's advice, jumped in with both feet, and bought a brand spankin new car.
The financing portion of the adventure was pretty hilarious.  Because while I am young (and yes have only ever had 1 credit card) I happen to have fantastic credit.  Which is pretty shocking for some reason.  I don't think its that shocking at all, my parents taught me that you don't spend money you don't have (sorry parents, that's definitely what I just did with this car!), you don't EVER miss a credit card payment, and you don't mess around with money.  In fact you save it.  As much as possible.  Thusly I have the shortest credit report ever (1 page) and there is essentially nothing on it.  And thank goodness I had that one credit card because apparently you need debt in order to get more debt?  Odd…
Anyway, moral of the story – new car!  I’m happy to introduce RUSTY! 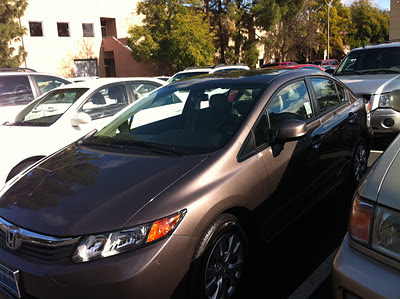 And dear god is he a beaut!
He has power windows and locks.  All of my dreams have come true!  I've never owned something so fancy in my LIFE...
Posted by Bloggity Bloo at 10:34 PM

Email ThisBlogThis!Share to TwitterShare to FacebookShare to Pinterest
Labels: Rusty