Confessions of a would-be baby snatcher

So if you know me, you know its no secret that I covet my neighbors baby.  Like I have mad baby fever.  And no I'm not one of those girls that planned out her life and decided that at 22.34yrs I would marry and at 24.75yrs I would have twin girls named lemonjello and oranjello (say with an accent so it sounds like LA-MONjallo) and have been collecting swatches of pink fabric for their nursery since I was 10 (not that that's a bad thing if that's what YOU did).  But I have always liked kids and they (along with little furry animals and strangers who need to tell their life stories to someone) have always had a freakish affinity for me.
So you can't blame me for wanting a squishy little one of my own right?  No you can't.  What you can fault me for is the way in which I have been planning on obtaining one said baby.
As of right now the current plan is to take my biggest purse to a well populated baby area and collect one adorable small child into said purse and then run away.  I do understand that there are some flaws in this plan (ie felony abduction, inability to run fast enough and such) but it seems so easy sometimes.
Tired parents/nannies + super cute babies wandering around aimlessly + one giant purse + one baby snatcher = happy sarah.
Ok people, obviously I'm not stealing a baby (right now).  And my friends and SP have put the kabash on the baby snatching jokes in public (apparently its like SO not kosher to joke about stealing babies - right up there with joking about bombs in airports or something).
I did go to a supercool baby shower on Saturday though that only fueled my desire for small squishy people.  I guess its good that all these people around me are having babies right now so that I can borrow them instead of stealing one...  I don't know though...I do have a pretty big purse right now =)
In other good (and more socially acceptable) news - the sun came out tonight.  And thus I (and the rest of the known world) rejoiced for many hours.  SP and I even took furball to the river for a run - which really hurt p.s.
Upcoming life highlights:
Fun stuff!
Posted by Bloggity Bloo at 9:40 PM No comments: 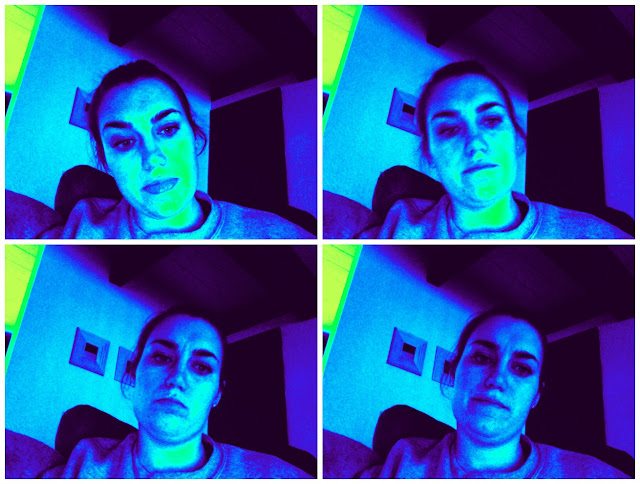 Its that time of year again.

The time of year when I seriously consider investing in a light box to stick my head under.  I think personally that I've gotten better with this whole gloom and rain nonsense in the past 6 years that I've been here but honestly enough is enough sometimes.  And peeps, I'm sorry but I was bred in SOUTHERN CA where the sun shines like 345.5 days a year and thusly my soul craves the light - in a similar way to which it craves coffee, and chocolate...but I digress.  As the point here is, WHERE THE FRICK IS THE SUN?

To make the doom and gloom worse the dog has taken up peeing inside again.  And therefore I have taken up hating her again.  It is clearly natures' reasoning to make animals and babies cute so that you don't kill them when they annoy the crap out of you for the 90th time.  Because honestly there is not a whole lot else saving that tiny furry face these days.

Bonus of the week - Cesar Chavez.  The purveyor of short weeks.  Muchas Gracias Cesar!  My tired brain and body appreciate the extra sleep they are going to enjoy tomorrow.  I will also eat some organic, locally grown fruit picked by humane farms in your honor.

Good luck with your light boxes kids.  Stay dry...and lit up.
Posted by Bloggity Bloo at 1:13 PM No comments:


Like sometimes you have to work.  FOR 10 FREAKIN HOURS A DAY.

If you are lucky like me though you have an SP who drives to your place of work long after you should have been home and brings your dodo the dog and buys you sushi.  Lets not mention that in the 5mins that you sneak your dodo the dog into your office she will inevitabley poop inside your office.  Not to mention that approximately 30mins later she will jump out of the car window in an attempt to get to another dog....have I mentioned recently that we adopted a terror from the shelter who may be somewhat mentally unstable...yeah...


Also my right shoulder/neck area hurts really bad from the repetative motion of opening mail and making 10million student folders. And probably also from smooshing the phone to my ear with my shoulder.  Do you think that neck pain is considered a work induced injury and I should file workers comp?  If it involves a free massage I might consider it...


In other news...its raining again.   i.e. monsooning and I am now forced to be a hermit once again.  Seriously though rain, I'm kinda done now. Please bring on spring.  Kthxbye


This weekend SP and I had nothing planned.  Nothing.  How glorious is that?  I literally can't remember the last time that happened.  So what have we do with our nothing weekend?  Made a giant list of things for us (ie SP) to do around the apartment a la putting up shelves and vacumming and grocery shopping - you know like the basic necessities that you apparently put off inevitably when you work 10hours a day.  Did I mention yet that I've been working 10 hours a day?   I am such a whiner, I know it, you don't have to tell me.  But we did do a lot of things and had essentially one whole day of doing nothing.  Oh weekend you are just what I needed :)

Posted by Bloggity Bloo at 8:28 PM No comments:

Thus is the life of a working shmuck

Hey remember that one time I thought it would be a good idea to get a 40hour a week job?  What was I thinking?  Oh I know I was probably thinking, hey a real paycheck and complete medical benefits sound pretty great right about now!  Sadly I forgot that what often comes along with perks such as moolah is the need to, oh, actually work, and be stuck in a room all day.  Say WHAT?  working?  nahhhh

Good things (besides paychecks and medical benefits) I work with really hilarious people who make me laugh all the time.  I also do not have anyone watching over my shoulder all the time and I am the queen of my office and get to do things my way.  I also have more or less flexible hours which es muy bueno.  And also yesterday I worked with the cutest faculty ever.  You are probably not supposed to refer to faculty as "cute" but seriously they were the nicest, most enthusiastic, cutest faculty I've maybe ever met (no offense dad).

So I guess I'm not really complaining about my job because really it is a good job and I even like it, cute faculty and all.  The being stuck in a room thing might get a little harder as the sun starts to hang out with us more, but I guess I'll just open the blinds really wide and pretend I'm outside.

Other news - BFF arrived YESTERDAY!  Glad Tennessee could spare her for a couple of days.

Also Tuesday I spilled 2 coffees and 1 bottle of water on myself - beat that spillers!
Posted by Bloggity Bloo at 8:08 AM No comments:

Fresh Toilets aka My Favorite!

You know what's my favorite?
When I walk into the bathroom at work in the morning and the toilet seat is up.  And I know that there is a brand new freshly cleaned toilet all for me.  :)  Gross or not it makes me happy.
In other news working is so silly and exhausting.  I have been wanting to run so badly but I can not find the energy to get up early in the morning or go after a long day of crazy work.  Like I do not know how people do it.  I want to run at like 9am or 2:30pm.  But clearly that is not going to work.  I keep telling SP that she needs to start making a billionty dollars so that I can be a stay at home wife/dog watcher.  SP doesn’t seem so keen on the idea… ;)
Nothing super exciting in this world – oh except this news – bff is coming to visit from Tennessee soon!  YAY!
You know what else is my favorite? 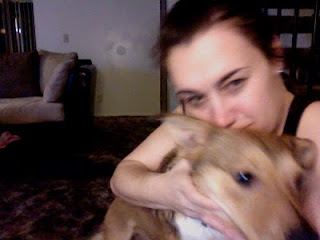 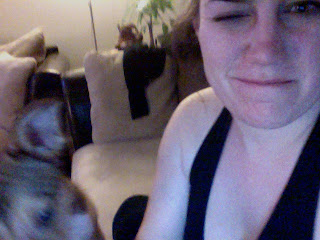 Puppy love :)  Kisses from Kori!
Posted by Bloggity Bloo at 7:21 PM No comments: