So I've got several entries I've been saving until we could announce the news so I'll try to run through them in the next few weeks and get errrybody up to speed :)  Here's my first one from RIGHT after we found out!

SP got the "smiley face" on Mothers day which in and of itself seems pretty magical.  It was quite the gift - seeing as I was feeling pretty non-mothery that day.  The next day we went in for a late morning IUI with my most favorite small asian, very efficient doctor and then out to lunch to cap it all off.

And then we did our best to forget about everything for 2 weeks.  Which was easier this time around because we were insanely busy with trips and visitors etc etc.  Towards the end of the dreaded two week wait SP was pretty convinced that she wasn't pregnant because she didn't feel anything...I was playing Switzerland (but reminded her that the time before she had felt something and then she wasn't pregnant...and oh yes...this was only her 2nd try, damn fertile myrtle!)

So on day 13 of 14 we couldn't take it anymore.  And even though we had guests SP decided she would just take a pregnancy test and see what it said.  So early that morning we are lying in bed, she takes the test, leaves it, takes the dog out, comes back and checks the test and says "it's negative" and throws it away.  We proceeded to throw a small pitty party.  SP is mad, I'm just disappointed.  But oh well it's only time 2 and we will try again and things are working out blah blah blah.

Finally I get up to use the restroom and decide I will surreptitiously check the test too...you know just in case.  Simultaneously SP yells out, "Can you just check it for me?"  So I pull the test out of the trash (classy I know) and I see TWO FREAKIN LINES.  I wanted to scream (but we had guests) And I was like are you screwing with me this has two lines.  SP swears it only had one line when she looked (its very possible since she probably didn't wait the 3 full minutes.  But this was like 2 REAL lines like not 1 line and a 'maybe' line.  But still we worried it was wrong or an evaporation line or whatever other crazy excuse you could make up in your brain.  And I'm googling everything on the planet and trying not to cry.  And so SP takes another test (because we are junkies) and it's only like a few hours later and you're really supposed to let it build up and stuff but guess what?!  TWO LINES AGAIN.  At this point I'm whisper screaming YOU'RE PREGNANT, YOU ARE PREGNANT and crying in our bathroom as quietly as possible.

It was possibly the craziest moment of my life thus far.  Don't worry she took 2 more pregnancy tests the next day and then a blood test so we're pretty solid now that's she is knocked up! Today I'm going to give you a gift.  My heart cracked wide open.

Just about 12 weeks ago today we found out that my beautiful, kind, loving, amazing wife is PREGNANT!

I'm not going to lie to you, I've been feeling some serious guilt sharing our super happy news when many people I know are going through some seriously rough times lately.  But then I remember the months and months of crying over negative pregnancy tests and I remember that I trained for this, that I dreamt for this, and hoped for this and have worked for this and walked down every twisty pathway for this.

I have a lot of catching up to do (I've been keeping only a billion journals waiting for this announcement day) and a lot of things to say about mama-hood, and non-gestational parenthood, and love and life.

But for now just this: 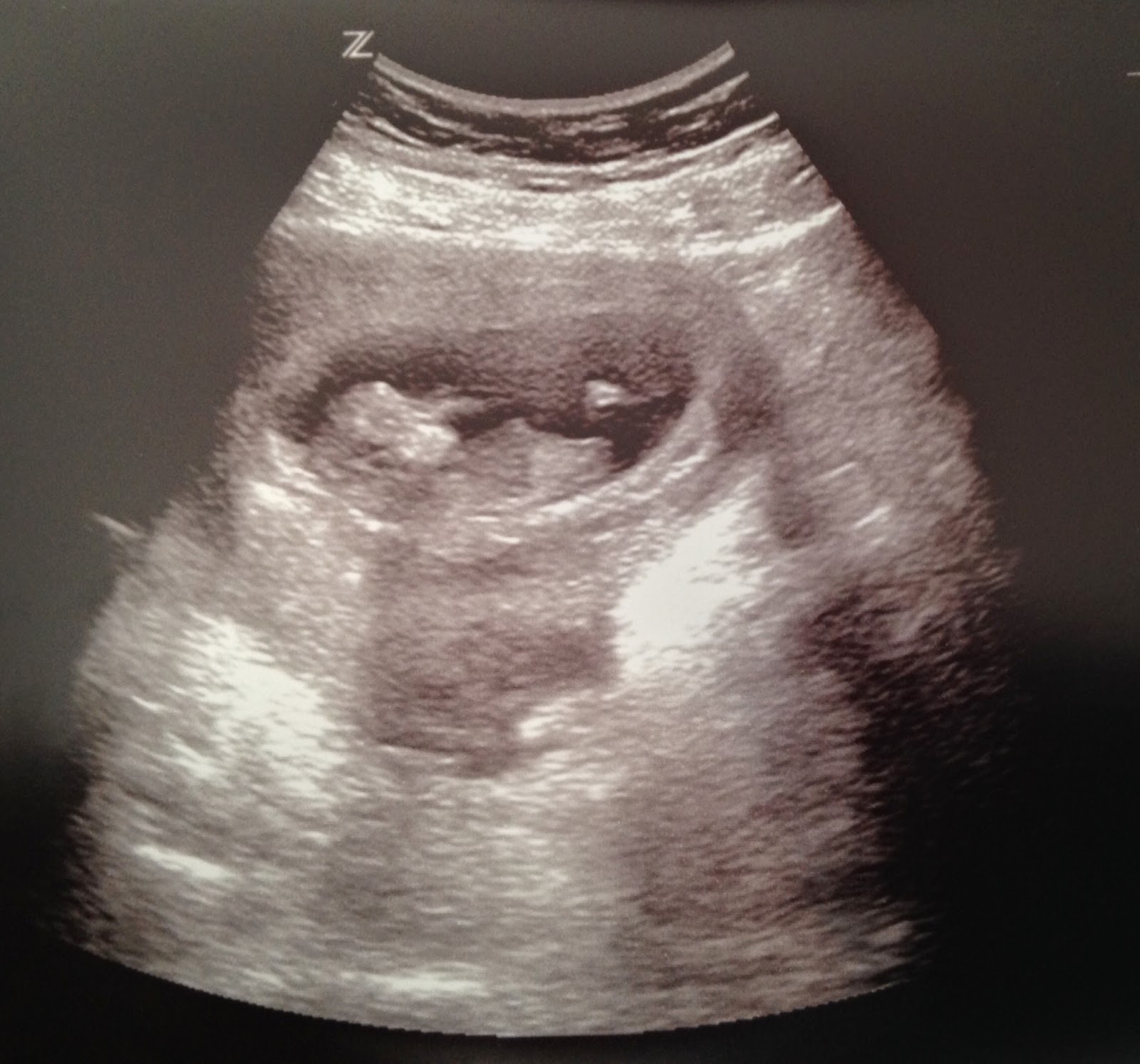 Every bit of love from my cracked heart,
Sarah
Posted by Bloggity Bloo at 9:27 PM 14 comments:

So over the 4th of July weekend we decided to go down to San Diego to visit the parentals....and because really, who doesn't want to go to San Diego?!

We spent a long weekend in July stuffing our faces full of sunshine and mexican food. Sadly we didn't get a chance to get to Sea World this time around, but we're still hoping to go when we head back down in late August!  But it didn't even matter because we relaxed, we sat around, we went to the beach, we took a walk by the embarcadero, and we spent the 4th ofJuly at the flying field watching model airplanes and 2 sets of fireworks! 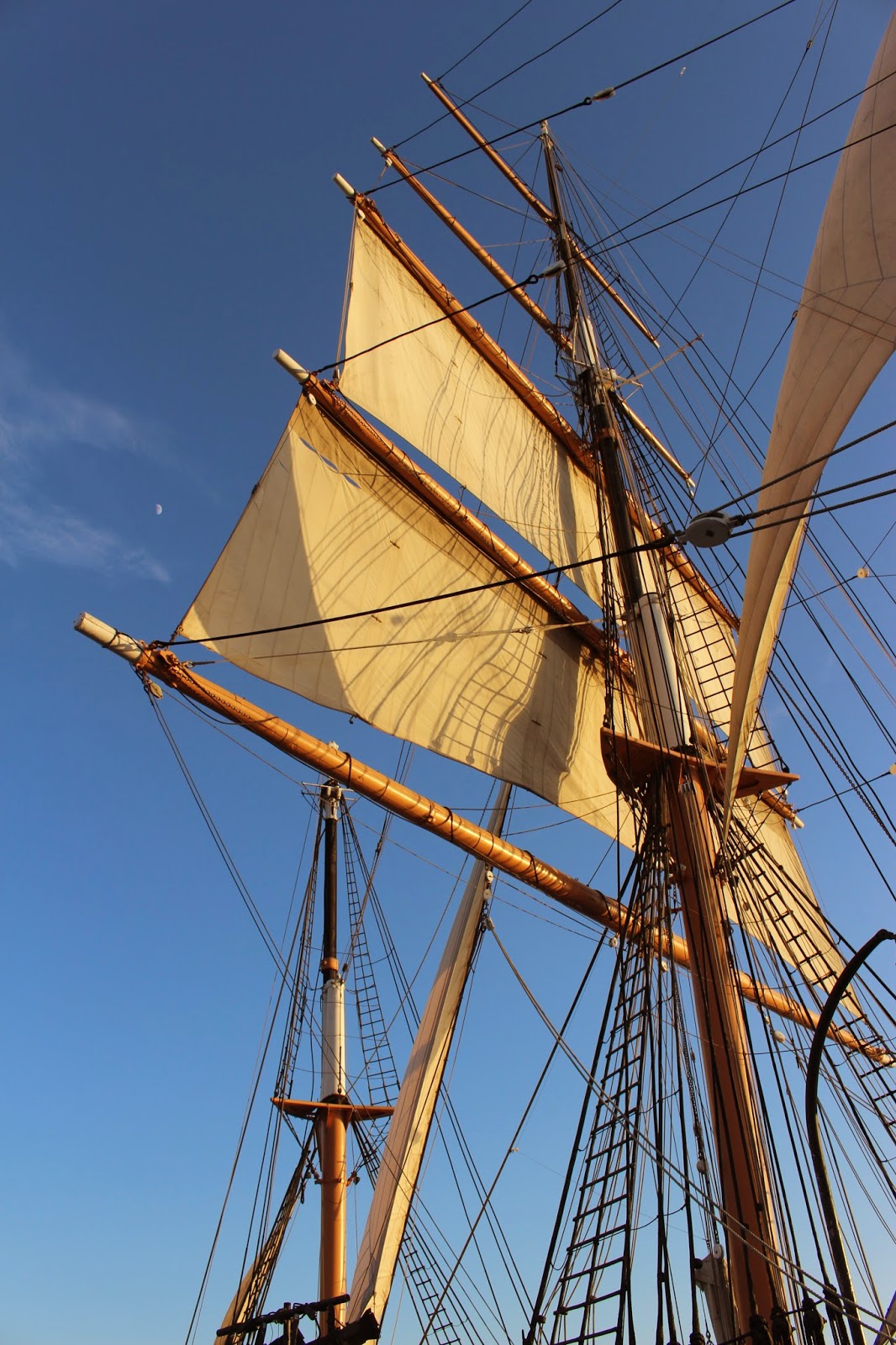 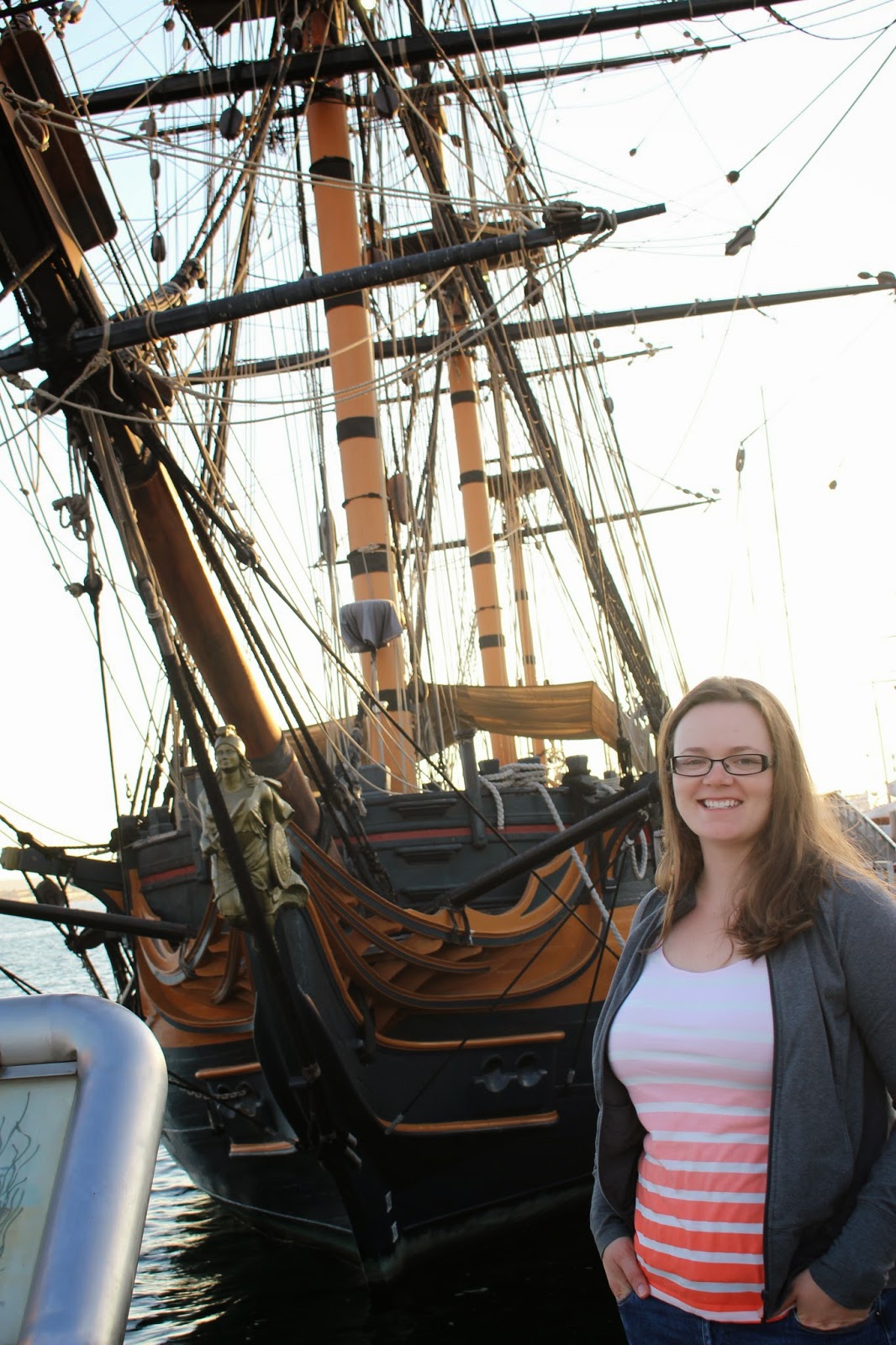 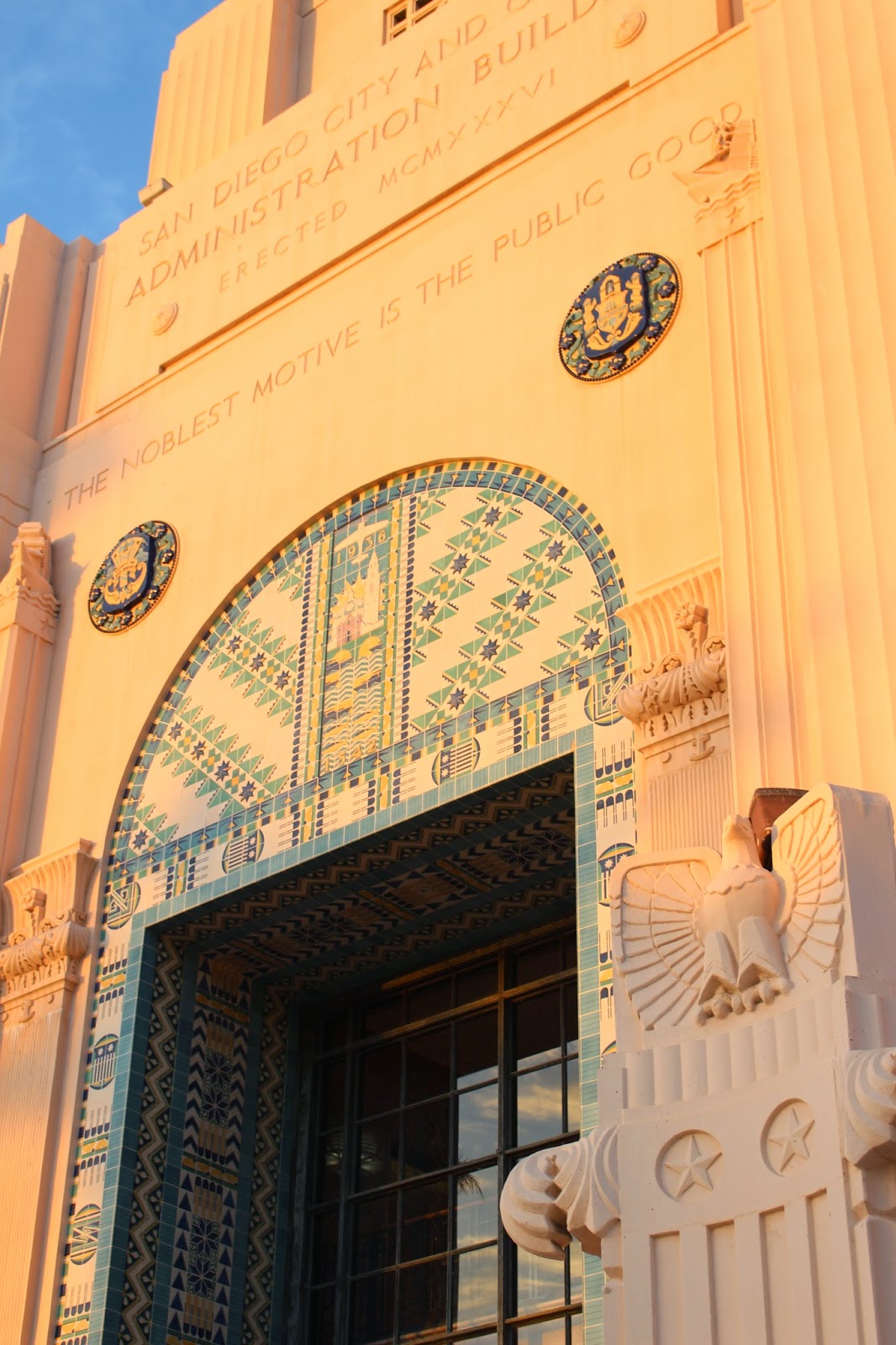 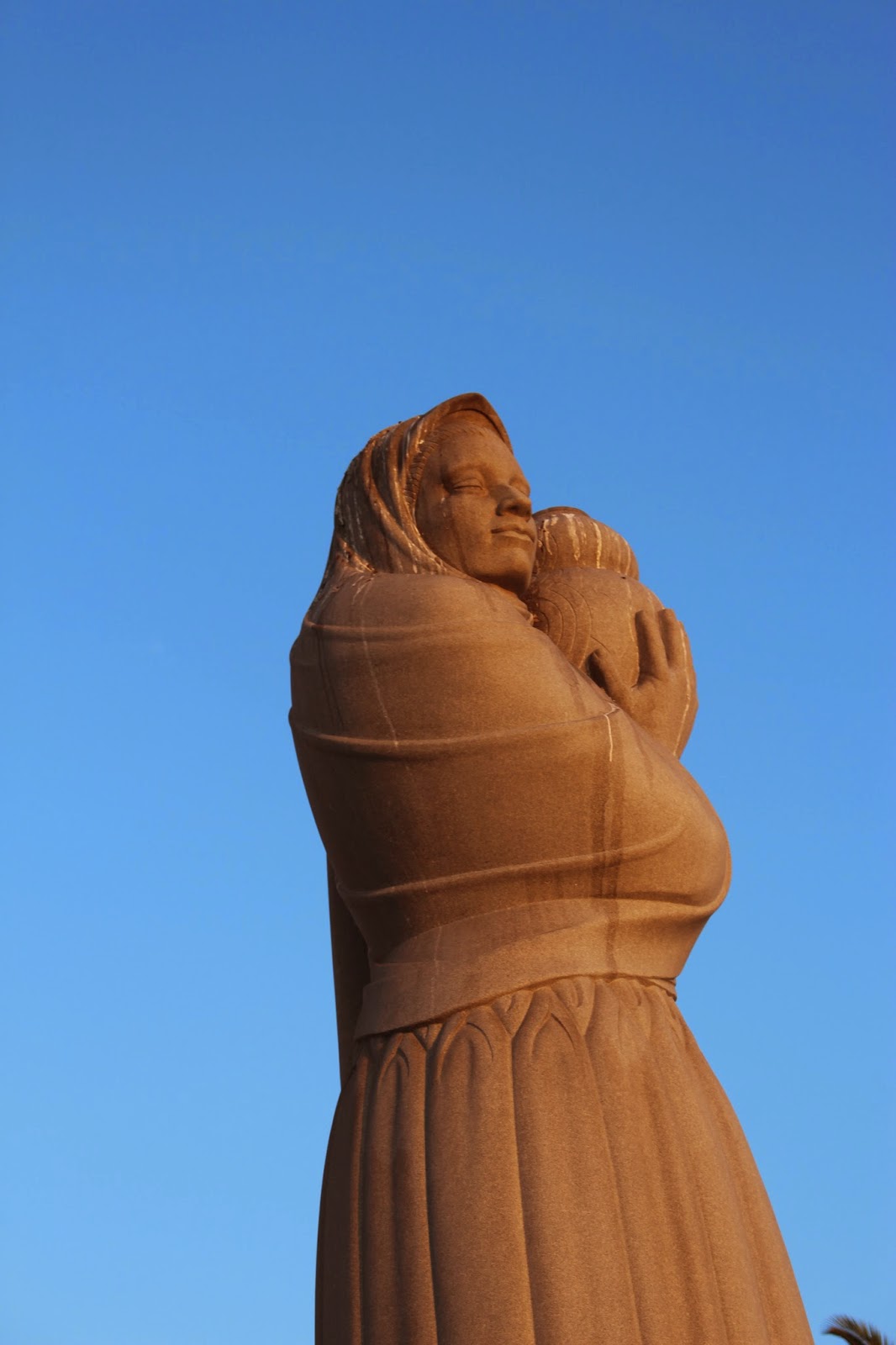 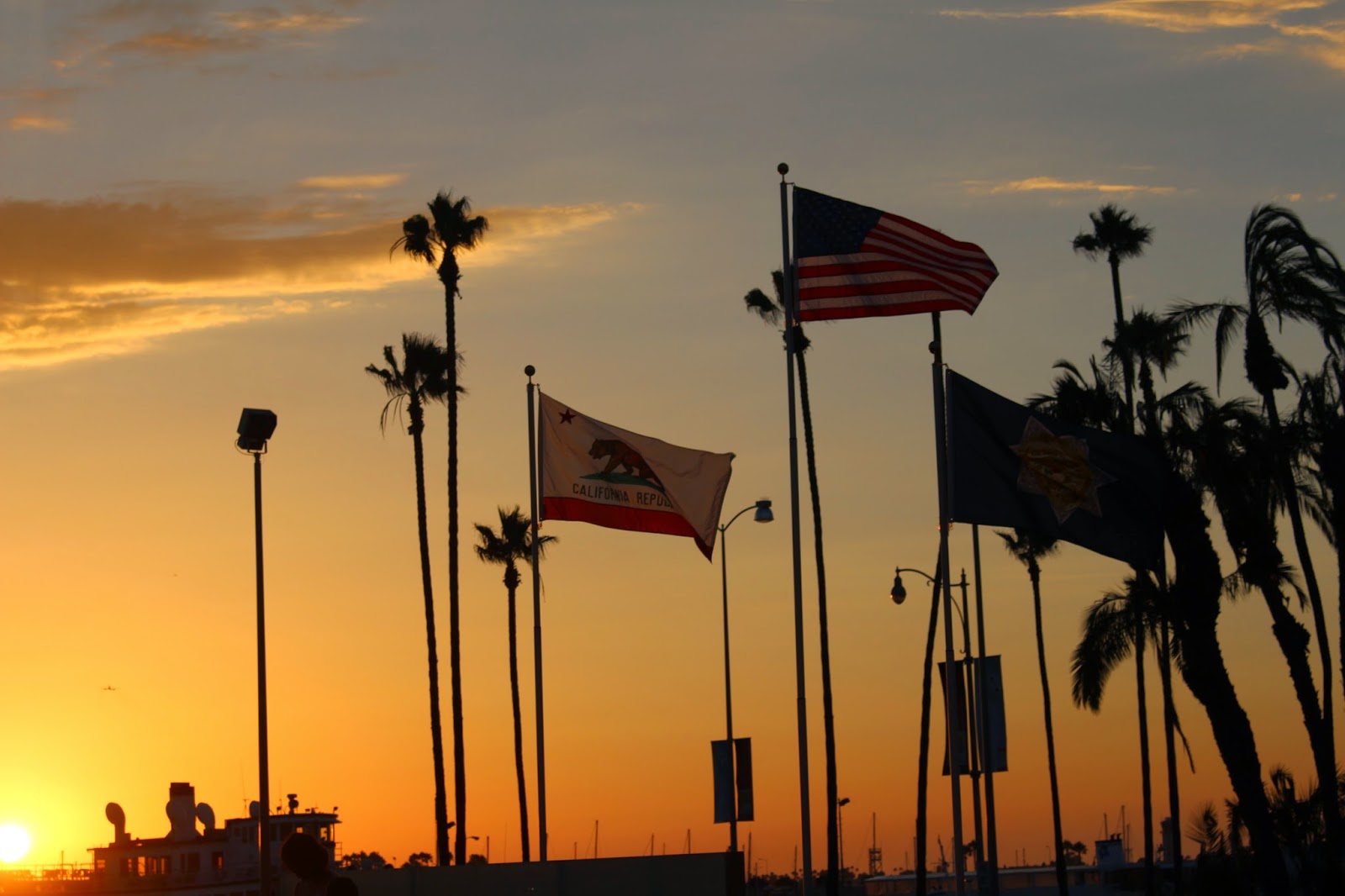 We have a few more SBL's coming up in the next month (including camping - its been so long!)  but otherwise not a ton to report. A new lovie was born last weekend and I'm already in love with him and my good ol' friends are getting married this weekend (pictures of both to come!)

You guys, I'm just loving this summer - it's absolutely jam packed but surprisingly relaxing at the same time.  It's like vacation all the time (while still being at work most of the time...)

Two weekends ago (I'm still catching up!) was a banner weekend in the summer bucket list arena.  We hit 3 of the things on the list and I swear I'm not going for efficiency here people (in fact I want to draw the summer out as long as possible!).

Friday evening was date night because we're all romantic and stuff. So I packed up the wife and a bunch of blankets and we went to watch Frozen in the park with approximately 200 seven year olds. So what if we were the only people there without kids, right?! Before the movie we just happened to be right next to Sunflower Drive -In. Sunflower Drive In is this hippy vegetarian restaurant that has been there since 1978. There is no restaurant just a window you walk up to where you can order their famous nut burger.  And let me tell you what it was the bomb diggity.  This vegan burger would turn any carnivore it was that good.  So we grabbed our nut burgers and headed back to listen to said 200 seven year olds proceed to sing the whole movie.  It was one of the single most hilarious things I've ever been witness to.  And I didn't feel like a creepy adult at all!  And with that 2 birds, one stone! 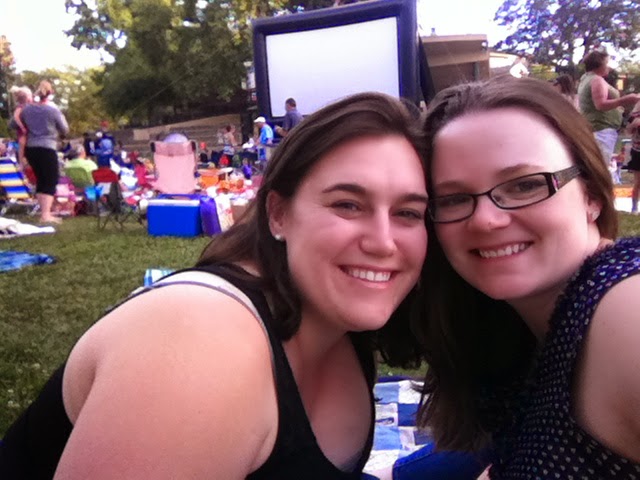 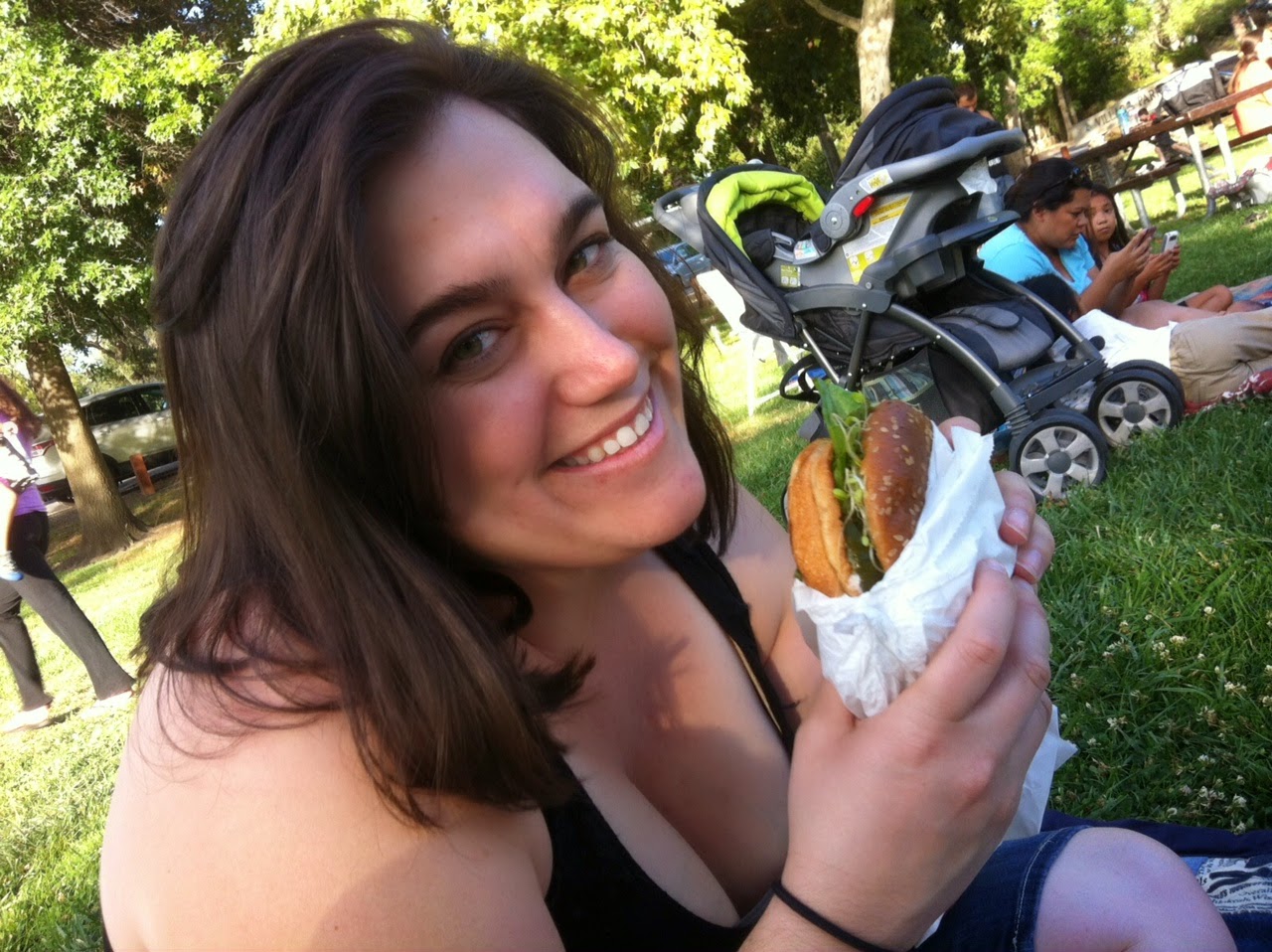 Saturday we crawled out of bed and made our way to the great(?) city of Oakland to watch the green and gold A's beat the Red Sox.  Since I grew up in San Diego, home of the fabulous Padres, I definitely have a thing for the underdog so really it was the perfect game for me.  It's probably been 2 years since I've been to a major league baseball game (I've been sticking to our local minor league team) and it was really fantastic.  The crowd, the energy, the kooky people everywhere, even the $11 beer...loved it all.  Sunkissed, baseball perfection...and the A's even won! (that never happens at Padre's games!) 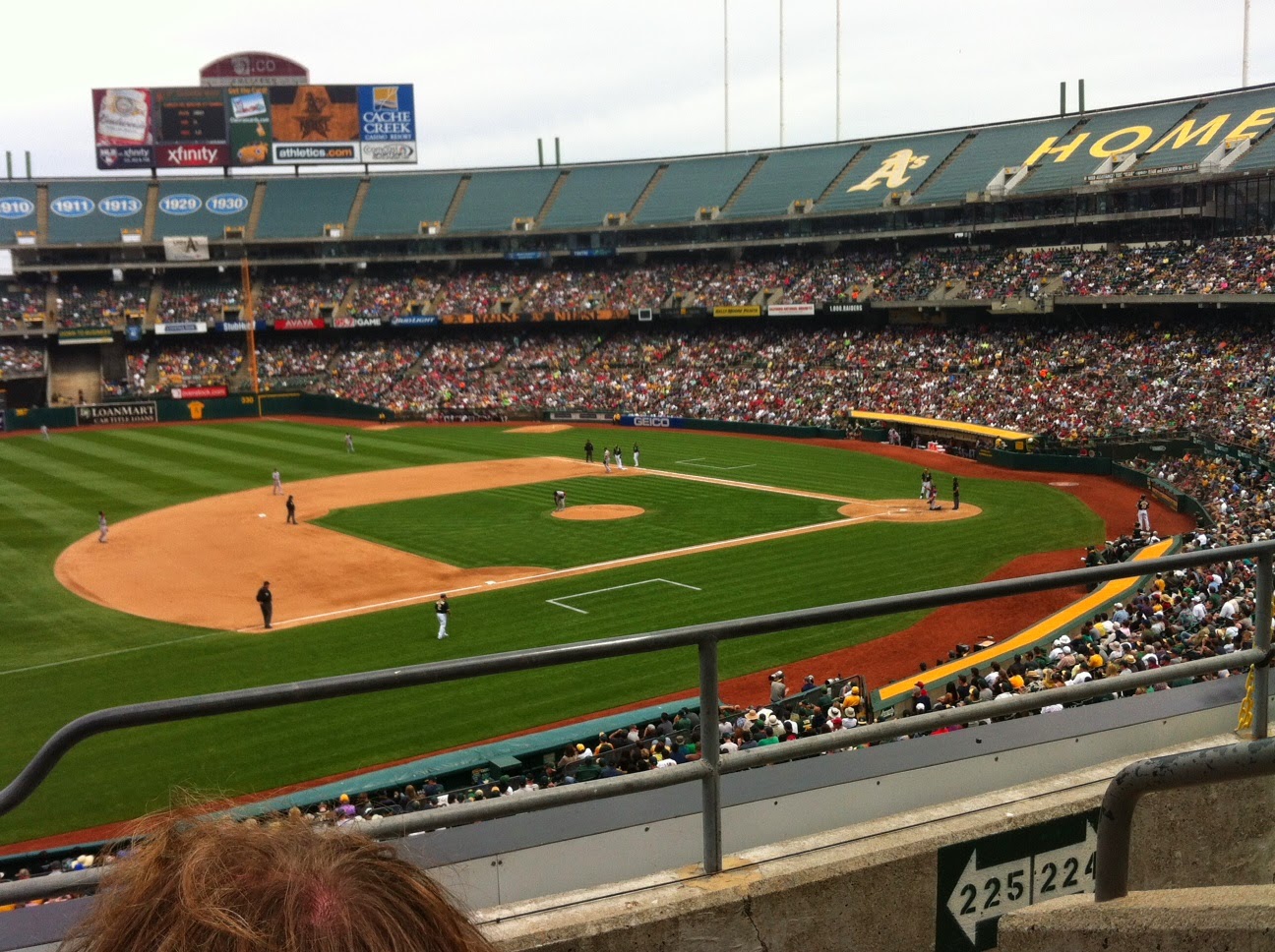 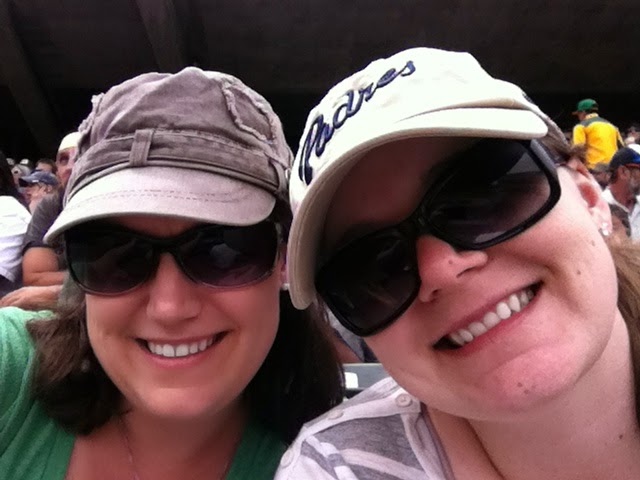 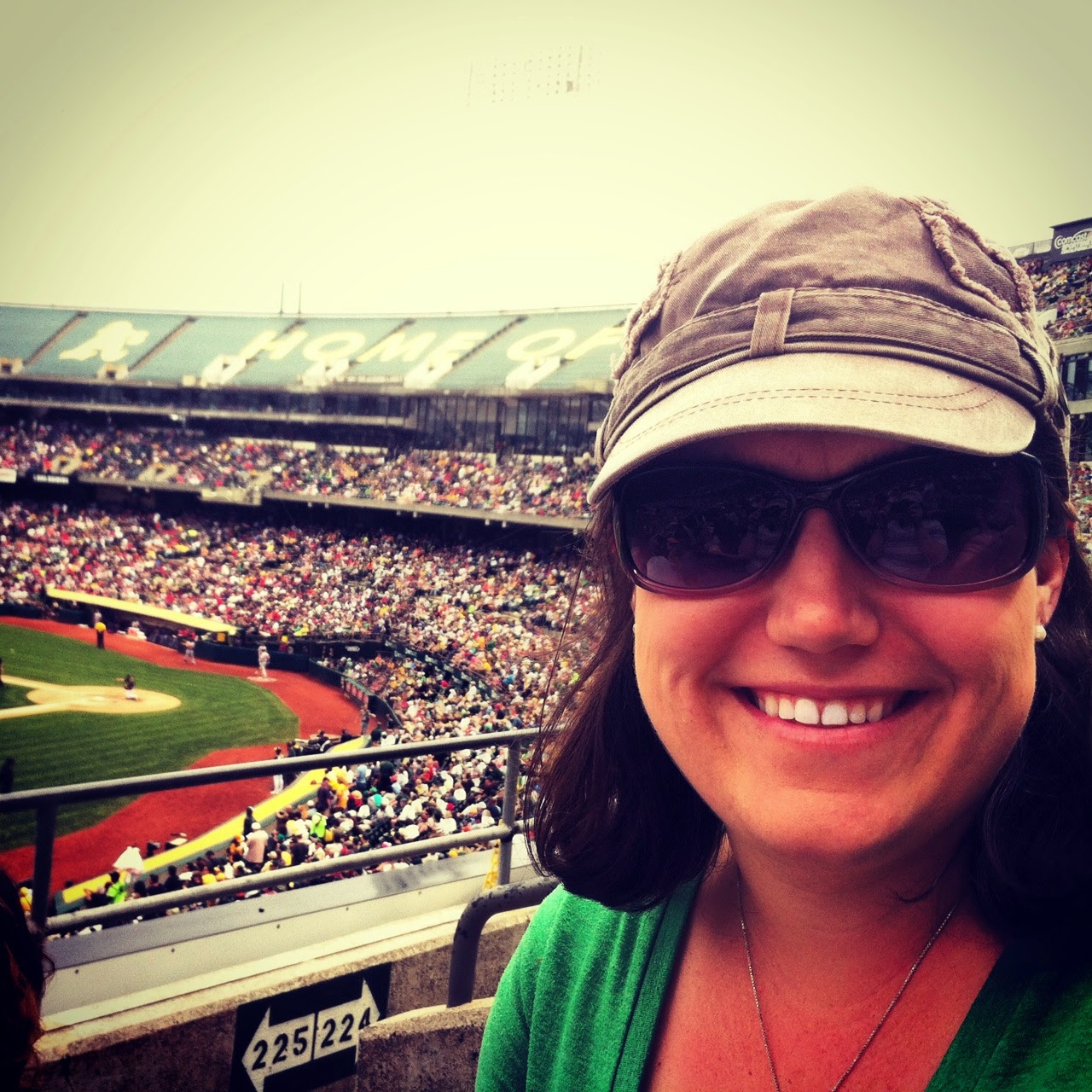 So there ya go - check, check, check...three more down.  This week we are headed to San Diego to spend the holiday with my parents where I plan to stuff my face full of tortillas and sunshine!